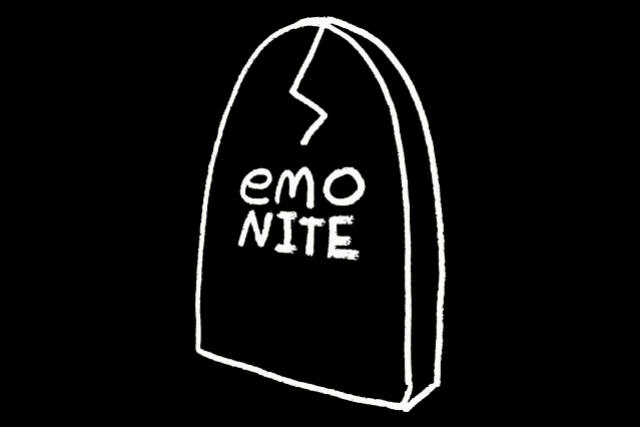 Not a band. Not DJ's. We throw parties for the music we love.

As Rolling Stone observed a few years ago, “Emo Nite Vindicated the Scene.”

It's all too easy to forget that before the first Emo Nite in December 2014, “emo” was a joke.

Somehow on its journey from a melodic post-hardcore subgenre, built on earnest emotional expression, to a mainstream moniker assigned to anything remotely angsty, “emo” became a dirty word. Despite the positive impact ushered in by waves of bands, from the crucial “Revolution Summer” and Sunny Day Real Estate through Taking Back Sunday and My Chemical Romance, accepting “emo” as a dismissive designation or identity invited polite embarrassment and even scorn.

But Freed and Petracca grew up loving the music associated with emo and the people like them who similarly embraced outsider art and subculture, regardless of changing fashions or pretentious snobbery. Petracca told The New Yorker the idea behind the first Emo Nite celebration was to center a happy, communal experience on the music they once listened to when they were upset and alone.

“I sang Dashboard Confessional at karaoke at a friend’s birthday party and thought it was super fun to go out with friends and listen to music we actually liked,” recalls Petracca, who met Freed when the pair worked at a creative agency together. “Every other club in LA played EDM, Top 40, or hip-hop. We always found ourselves pre-gaming with emo and pop-punk music before we went out.”

Freed knew a bartender at the Short Stop in Echo Park and convinced him to let them throw a party on a random, rainy Tuesday. They invited friends via Facebook; double the bar’s capacity turned up. “We decided to see how far we could take it,” Petracca says. “‘Who would be the craziest guest?’ We invited Mark Hoppus, and he came! He did our first one at Echoplex, which was our third party ever.”

“There’s no disconnect between the artist and fan,” Freed points out. “I think that’s brought people closer to the music. It created a really strong sense of community, at a time when emo wasn’t ‘cool.’”

There may be a surprise acoustic set or even a full-band performance, but ultimately, it’s about the experience. Emo Nite turned a party into a community, reclaiming the spirit of how the scene began.

“A larger promoter told us the shelf life of a club night in Los Angeles was two years,” Freed says, marveling at Emo Nite’s staying power. “A hundred percent of it is the people that go to it. This music makes people feel connected. The energy of it is so special. You get a group of people together who look different, but they have this thing in common. We started seeing friend groups form really, really quickly. People met their significant others at these events. The community really trusts each other.”

“What Emo Nite does better than any of their competitors is they make ‘emo culture’ feel both nostalgic and brand new,” The Summer Set’s Brian Logan Dales told Forbes, in a profile which included professions of love from members of Papa Roach, Underoath, and State Champs. “You can go to an Emo Nite with your best friends and sing along to old songs you grew up with, and at the same time, discover a brand-new artist who’s making music today because they grew up on that very same music as you. They’ve taken the emo of the past and helped it forge a new path for the future.”

As emo reenters popular culture with a blend of adoring nostalgia and optimistic forward- thinking, Emo Nite remains an authentic space to celebrate diversity, experience passionate catharsis, and champion authentic expression. Emo Nite isn’t a band or a DJ crew. It’s an idea, one as simple as the urge to throw a party for a beloved style of music. Often imitated but never truly duplicated, Emo Nite’s founders and supporters are fond of saying, “If you don’t see the grave, it ain’t our rave.”

“There’s a lot of ownership from our community of the event itself and the Emo Nite brand,” Petracca says. “It’s about breaking down that barrier of ‘Look at me, it’s all about me.’ No, it’s about us, together, in this room. It belongs to every single person that comes through the door.”
The co-founders continue to look ahead. “Emo Nite definitely impacted culture,” Freed notes. “But we have no plans to stop changing the way we view the evolution and expansion of the genre.”

There are currently no upcoming events.