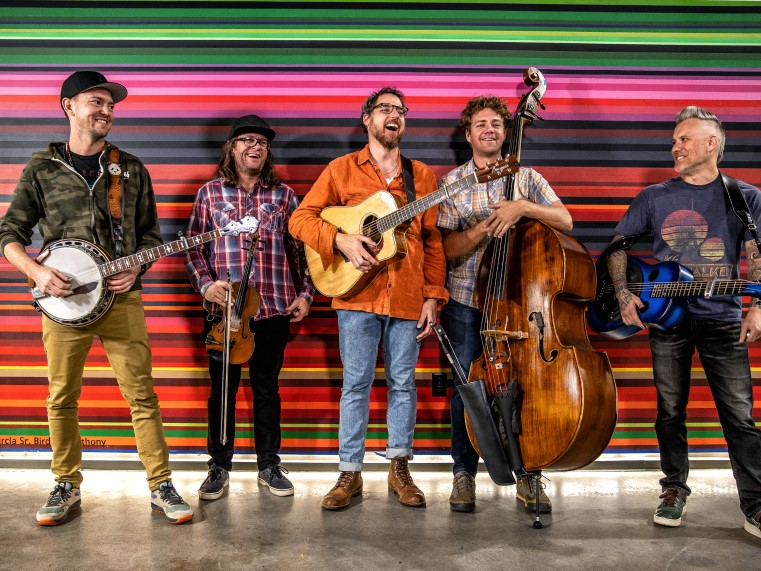 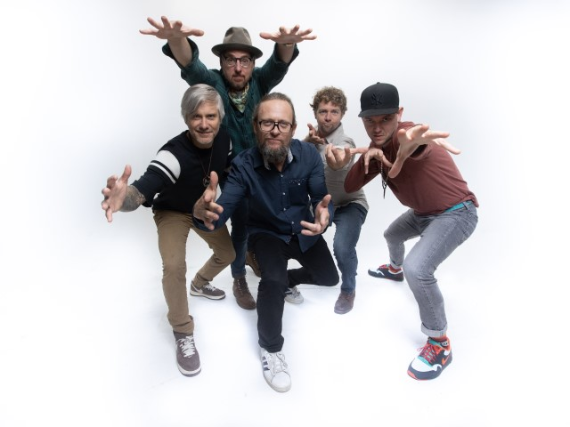 "With a nod to the past and a firm foot down on the gas toward the future, the 'Dusters... don't leave bluegrass behind; they're stretching it from within." - New York Times

"The Stringdusters are the Star Wars of Bluegrass and this is their Return of the Jedi. Stop fiddling with your lightsaber and get this album." - Ryan Adams

A band should never stop progressing.

Forward motion belies creativity and evolution. A staunch and unwavering commitment to progression is how an unassuming group of five friends can collectively become a GRAMMY® Award-winning force of nature. That’s exactly how it happened for The Infamous Stringdusters. Within thirteen years since their 2005 formation, the band—Travis Book [bass, vocals], Andy Falco [guitar, vocals], Jeremy Garrett [fiddle, vocals], Andy Hall [dobro, vocals], and Chris Pandolfi [banjo, vocals]— have consistently forged ahead, relentlessly exploring the musical possibilities of a “bluegrass ensemble” and breaking down boundaries in the process.

In a genre known for traditionalism, the ‘Dusters have consistently covered new ground, inspired fans, and redefined what a bluegrass band can be. 2018 represented a high watermark for the quintet as they took home a GRAMMY® Award in the category of “Best Bluegrass Album” for their 2017 release Laws of Gravity.

Even with such milestones, the members feel like they’re only getting started.

“I’m most inspired by the evolution of the music,” agrees Book. “The band is reaching new heights with our exploration and jamming. The repertoire is deep, and our crew is so entwined in the music and presentation of the show. It’s all come together in the last year or so.”

Hall adds, “Releasing three recorded projects this year has been artistically exciting. Mostly, the band has taken a huge leap forward in our live show with our improvisation blending from one song into the next. It’s made everything that much more fun.”

The motion includes a prolific output that rivals any act in music. In 2017 alone, they released three projects: Laws of Gravity, Laws of Gravity: Live, and Undercover Vol. 2 through Lumenhouse Recordings. Impressively, the band’s eighth full length record, Laws of Gravity, received a 2018 GRAMMY® Award nomination in the category of “Best Bluegrass Album”, bowed in the Top 10 of the Billboard Heatseekers Chart, and marked their third debut at #1 on the Bluegrass Albums Chart with Undercover Vol. 2 becoming their seventh Top 10 entry. Recognized by some of the top names in the game, they teamed up with Ryan Adams for performances of “Sweet Carolina” on The Late Show with Stephen Colbert and at Telluride Bluegrass Festival, and Newport Folk Festival. Phil Lesh also tapped them as his band for Phil and Friends at Lockn alongside members of Phish.

Another tenet of that progression, the second installment of the Undercover series exemplifies the exploration ethos, transforming various recognizable anthems into raw and rootsy gems. “Jessica” by The Allman Brothers Band, rollicks and rolls, “Get Lucky” by Daft Punk maintains its dancefloor energy, and Marvin Gaye’s “What’s Going On,” adopts newfound urgency. The Cure’s “Just Like Heaven” undergoes a bluegrass makeover with galloping banjo and blistering solos.

Along the way, The Stringdusters have won three International Bluegrass Music Association Awards in 2007 for their debut record, Fork in the Road, in addition to snagging a nomination for “Instrumental Group of the Year” by the International Bluegrass Music Association in 2010. Meanwhile, Things That Fly’s “Magic No. 9” garnered a 2011 GRAMMY® nod in the category of “Best Country Instrumental.”

The Infamous Stringdusters are grateful for the recognition, but they continue to move forward full speed ahead.

“I just hope that our music gives people a chance to feel free; free from the burdens of everyday life that we all have, free to just be themselves and be happy,” Falco leaves off.

“It's an amazing gift to play this music, to share this journey with these guys,” concludes Book. “I wouldn't trade it for anything, there's no other gig I'd rather have, no other place I’d rather be than in the moment making this music. This band, our organization and crew, we’re a family and I think I speak for everyone when I say I hope we can do this for years to come.”