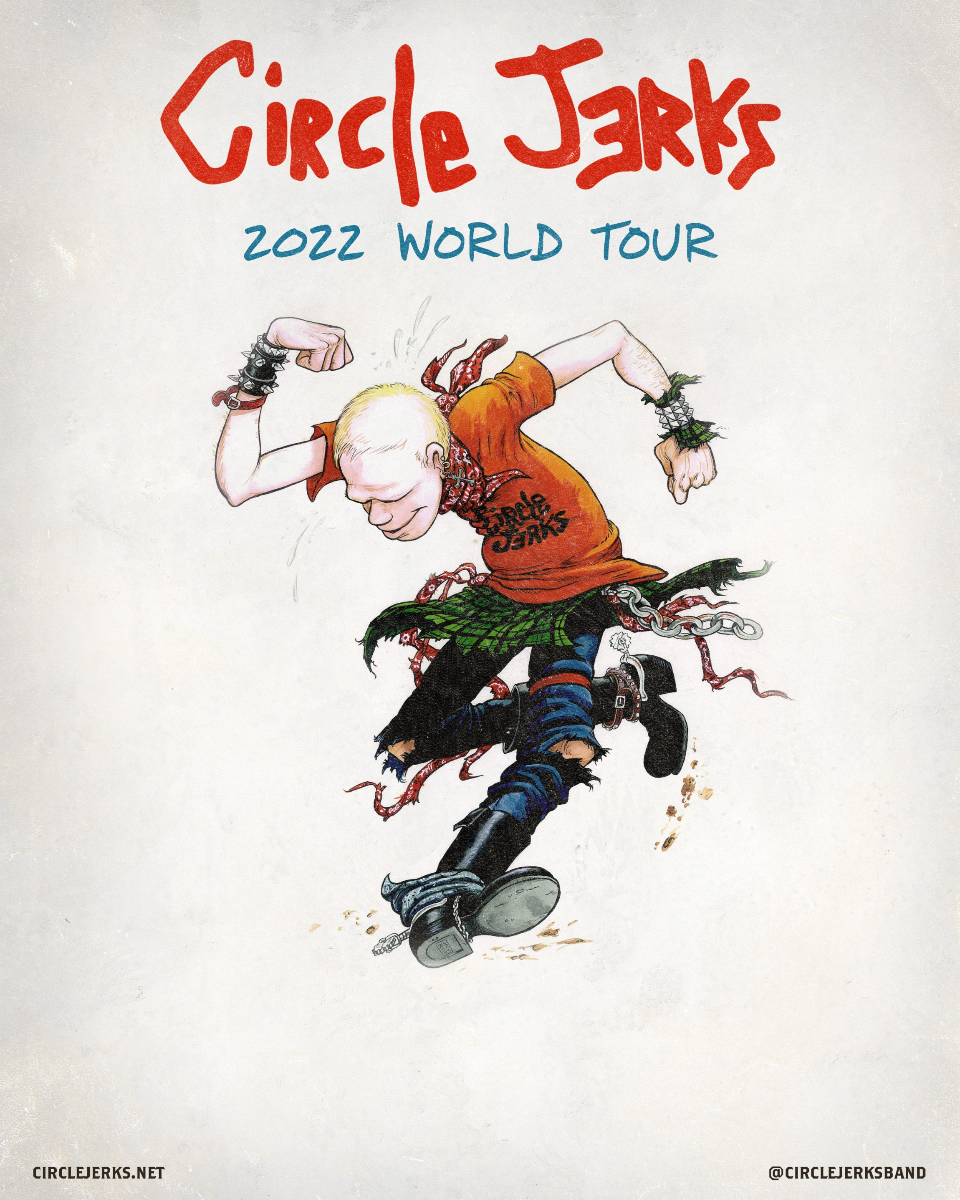 Please hold onto your event tickets as they will still be valid for the rescheduled date. If you are unable to attend the new date, please reach out to your point of purpose to request a refund by July 1, 2020.

Thank you for your patience and support! 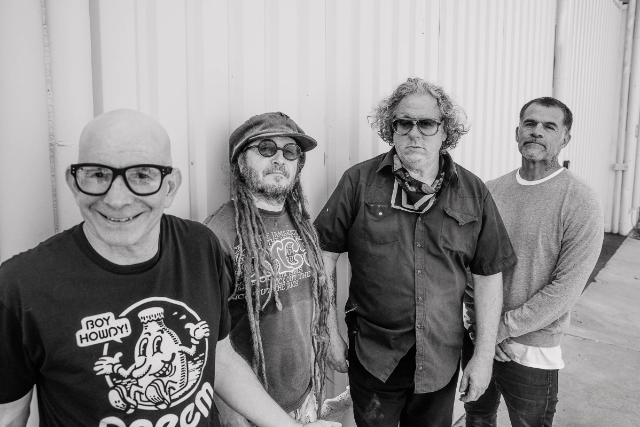 
Circle Jerks emerged from the punk underbelly of LA’s South Bay in 1979. First conceptualized at “The Church” of Hermosa Beach, the once infamous hangout of scene forefathers Black Flag, Descendents, Redd Kross, and The Last, the band quickly became the innovators of a movement simply referred to today as HARDCORE PUNK ROCK.

After serving as a co-founder and lead vocalist of Black Flag during the recording of its essential Nervous Breakdown EP, Keith Morris joined forces with former Redd Kross guitarist Greg Hetson to form what would become Circle Jerks, a reference uncovered from artist Raymond Pettibon’s slang dictionary. Having written material for their former bands respectively, Morris and Hetson, along with bassist Roger Rogerson and jazz drummer Lucky Lehrer, fine-tuned previously unfinished material to conceive the troupe’s now-renowned sound - thoughtfully steadfast, yet relentless and ferocious in nature. Unlike much of the unapologetic hardcore that seeped through the cracks of American suburbia, the music of the Circle Jerks was dynamic, deliberate, and most importantly, a force to be reckoned with. Bringing together a potent, articulate rhythm section with earnest yet oftentimes derisive lyrics and themes, the band was thereafter heralded as a leader of the pack, but with no real plan in sight.

The social climate of Los Angeles in the early eighties was marked by unsettled fluidity, with the expansion of hardcore punk that infiltrated the public eye. The “pogo” of a former generation became the “slam dance” of another - a moniker consecrated in the iconic Circle Jerks “Skanking Kid” logo designed by graphic designer Shawn Kerri. Songs got shorter, shows wilder, and the police - led by embattled police chief Daryl Gates - shut it all down. This earmark of punk lineage was epitomized in the groundbreaking documentary by Penelope Spheeris, The Decline of Western Civilization, in which Circle Jerks most notably performed to a pit of chaos. Today, the film is recognized and preserved by the National Film Registry at the Library of Congress as being “culturally, historically, or aesthetically significant.”

In October 1980, Circle Jerks released their debut studio album Group Sex on Los Angeles label Frontier Records. Clocking in at fourteen songs in just sixteen minutes, the record remains a milestone of the punk genre and equally as symbolic nearly forty years later. Plowing forward with a relentless, tooth- cutting work ethic and a rousing stage presence, the band would soon find itself headlining shows at LA’s 5,000-capacity Olympic Auditorium and emblazoned in cult video classics like Repo Man, New Wave Theatre, and The Slog Movie. Over the decades, Circle Jerks would release six studio albums, including the   acclaimed Wild   in   the   Streets (1982), Golden   Shower   of    Hits (1983), Wonderful (1985), and IV (1987), where they would become a major headliner during the alternative music explosion of Generation X. Morris and Hetson remain the only consistent members since the band’s creation, withstanding several lineup changes, including Flea and Chuck Biscuits. Bassist Zander Schloss (The Weirdos, Joe Strummer) has been a member since the 1980’s. During hiatuses, Morris fronted bands like OFF! and FLAG, while Hetson played guitar in Bad Religion.

The long list of those influenced by the legacy of the Circle Jerks ranges from Butthole Surfers to Red Hot Chili Peppers - with notable fans being Dogtown skateboarders, Chuck Berry, Alice Cooper, Elton John, Johnny Depp, Guns N’ Roses, and Philip K. Dick. Decades later, their music continues to make an imprint on generations of diverse music fans and those who challenge the status quo.

In celebration of the band’s 40th anniversary and the commemorative reissue of their celebrated landmark record Group Sex, Circle Jerks return to the stage for the first time in over a decade.
READ MORE + 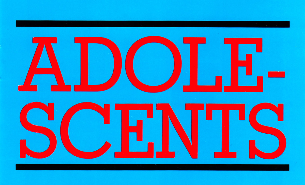 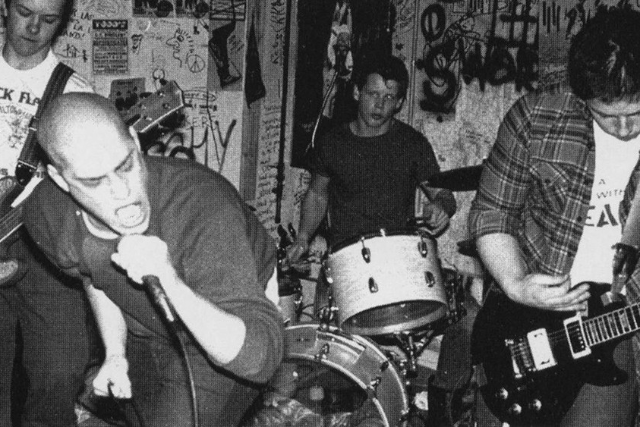 Negative Approach is an American hardcore punk band, formed in Detroit, Michigan in 1981. The band is considered among of the pioneers of hardcore punk, particularly in the Midwest region.[1] Like most hardcore bands, Negative Approach was little known in its day outside of its hometown. It is now idolized in the Detroit rock underground and the punk subculture, considered to be one of the elite bands of the "old school" era, and continues to be influential

Negative Approach initially broke up in 1984 with singer John Brannon moving onto Laughing Hyenas, and later Easy Action, but the band has reformed as of 2006 and continues to tour sporadically


Negative Approach was formed in August 1981 in Detroit, Michigan by John Brannon and Pete Zelewski, supposedly after seeing a Black Flag/Necros show. The first NA lineup consisted of Brannon on vocals, Rob McCulloch on guitar, Pete Zelewski on bass and Zuheir on drums. Not long after, Zelewski left the band to form the Allied and was replaced by Rob McCulloch's brother Graham.[1] Zuheir Fakhoury was later replaced by Chris "Opie" Moore. The lineup of Brannon/McCulloch/McCulloch/Moore would remain unchanged until NA disbanded.
NA's first gig was in the basement of Necros drummer Todd Swalla's mother's home. Soon after, they recorded a demo, and followed that up with an appearance on the Process of Elimination compilation 7” EP, released on Meatmen frontman Tesco Vee's fledgling Touch & Go label, named after his fanzine of the same name. The comp also featured the Necros and the Meatmen, among others. NA, the Necros and the Meatmen then embarked on the Process of Elimination tour. Though this “tour” consisted of a mere three shows (Boston, New York City and Washington, DC), it is cited as being a key event in the early spread of hardcore.
The first proper Negative Approach studio release came in 1982 with their self-titled 7” EP, also on Touch & Go. It contained “Can't Tell No One,” “Ready To Fight” and “Nothing,” which is considered by many to be the quintessential NA song.[1]
The following year saw the release of the Tied Down LP, also venerated as a hardcore classic.[1]
The classic line-up fell apart in 1983. Rob McCulloch claims that the band had grown weary of the group's reputation for writing negative lyrics but that John Brannon was not comfortable writing differently.[4] Also, Rob has stated that John's involvement with Larissa Stolarchuk from L-Seven was another source of tension for the group.[5] The band re-grouped long enough to record the Tied Down LP, then split for good.[5]
Afterwards, Brannon assembled a new line-up with members Kelly Dermody (guitar), Dave (bass) and Mike McCabe (drums). This version of Negative Approach played a series of live shows throughout 1984 which featured some new songs, such as "Obsession," "Tunnel Vision," "Kiss Me Kill Me" and a cover of "I Got A Right" by the Stooges. This line-up can be heard on the Live at the Newtown Theater bootleg 7" and some live tracks recorded at Boston's Paradise club that appear on the Total Recall. discography CD. The new line-up of the band split during the first week of their tour in support of Tied Down, playing their last show in Memphis.[5]
[edit]Post-break up (1983-2006)


John Brannon with Easy Action. Mac's Bar, Lansing 11/8/08.
John Brannon went on to front the punk blues band Laughing Hyenas with his girlfriend Larissa Stolarchuk (then calling herself "Larissa Strickland") from L-Seven,[6] and currently sings for Easy Action. In 2008 John Brannon sings 2 songs on Vitamin X's album Full Scale Assault produced by Steve Albini.
Opie Moore moved out from behind the drums to front '80s/'90s alt-rock act Crossed Wire along with Rob McCulloch. After Crossed Wire, Rob McCulloch attended college and has not pursued a career in music, although he maintains a home recording studio. Currently, Moore enjoys a respected solo career as an edgy roots-oriented singer and songwriter. His current band, Moore & Sons on the UK's Triumphant Sounds/Drawing Room label, features Lambchop member Dennis Cronin.
Graham McCulloch moved to Washington, DC and joined the Meatmen before forming Earth 18 with John "Bubba" Dupree (formerly of Void). Earth 18 released several albums and toured the US, opening for Nitzer Ebb. After Earth 18 disbanded Graham played for several years in Mother May I.
[edit]Reunion (2006-present)
It was announced in May 2006 that Brannon and Moore would play a Negative Approach reunion show, of sorts, for Touch & Go's 25th Anniversary show on September 9, 2006,[7] as well as two later shows in the UK - London on December 7 and at All Tomorrow's Parties on December 10. Despite repeated efforts by Rob and Graham McCulloch to be a part of the reunion and have the classic NA lineup play, John refused. It was instead announced that Harold Richardson (of Brannon's current band Easy Action) and Ron Sakowski (formerly of Easy Action, Laughing Hyenas, and Necros) would complete the lineup.
Negative Approach closed out the No Fun Fest in Brooklyn, New York on May 20, 2007. Thurston Moore played guitar on two songs at the start of their set.
Negative Approach did a brief reunion tour in the northeast United States in April 2008, performing in Brooklyn and Providence. They also played the wedding of Anal Cunt founder Seth Putnam. The band did a lengthier tour of Europe in June 2008, and later that year a concert in Los Angeles. In 2009, they played a string of shows in the US.
In 2010 Brannon discovered several unreleased Negative Approach recordings which contained the lost 1984 sessions of unreleased studio tracks. After meeting Curtis Casella of Taang! Records, Casella offered to release the recordings, which include "Friends Of No One", "Cargo Cult" "Kiss Me Kill Me", "Obsession", "Genocide" and a studio version of "I Got A Right". The tapes were brought to Jim Diamond to restore and preserve. Taang! released an album containing the recordings called "Nothing Will Stand In Our Way" in November 2011 around the time the band played the Fun Fun Fun Festival in Austin Texas with the band's friend and lawyer Anthony DeLuca sitting in on drums in place of Moore.
READ MORE +