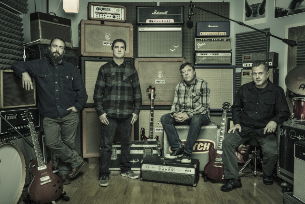 Forget whatever you thought about Clutch. Earth Rocker crumples up the bad categories that have miscast them for years — stoner rock, post-hardcore, metal, grunge — and leaves no question about what they are: a damn good rock and roll band.


Earth Rocker is a solid, straight-up rock and roll album, exactly what the band had in mind for their tenth studio album, now that their Weathermaker Recordslabel is fully up and running. “It might be the best Clutch album that has ever existed,” says guitarist Tim Sult.


It's a concise, efficient album. That was the point, says drummer Jean-Paul Gaster. “We really tried to reign in the jam aspect of the band. We like to improvise a lot, but this album, we really wanted stuff mapped out. We wanted to go into the studio fully armed to make a really powerful record.”


“I'm excited about its succinctness, and how balls-to-the-wall it is,” says frontman Neil Fallon. “The length of an LP is optimal for enjoying a body of new music, approximately 40- 45 minutes. There's something to be said about Side A and Side B. It's more cinematic, and that was the approach.”


The album began taking shape when Clutch toured with Mötorhead, then Thin Lizzy. Revisiting those two favorite bands, they were able to apply their own experience as musicians to better understand the dynamics of their heroes. “The songwriting process happened around the time of those tours, so that really sank into our writing,” Sult recalls. “Maybe people expected us to go more acoustic or bluesy, but this album definitely showcases a riffs-in-your-face kind of style. These songs ended up being faster and a bit more rocking.”


“Overall, we wanted the album to pick up the pace a little bit,” bassist Dan Maines explains. “Songs developing at a faster tempo led to a very straightforward songwriting approach.”


That songwriting simplicity is also indirectly a result of the Basket Of Eggs EP issued two years ago with the Weathermaker re-release of Blast Tyrant. “That acoustic stuff represents a new style of writing for us,” Maines says. “It kind of forces you to strip down what you're playing. We had almost two years to spend on the writing process, and we had a lot of ideas. Having two years allowed us to trim the fat.”


Clutch are passionate students of rock and roll, and music in general. Gaster's love of a good shuffle brought that rhythmic approach to nearly half the album. Professor Longhair's “Bald Head” — notably the loping style of Earl Palmer's swinging eight notes — was a direct influence on Earth Rocker. So was Thin Lizzy drummer Brian Downey, also a shuffle monster.


“When you hear a light shuffle, or the brushwork on 'Gone Cold,' at first it can be a head- scratcher,” says Fallon. “But when you join in, you will be taken to a place you wouldn't have gone by yourself.”


Fallon's reputation as a clever lyricist will likely grow once people hear Earth Rocker. His approach is similar to writing fiction. “You've got to do it convincingly. There's a bit of theater to it, in a way. The four minutes a song is being recorded or performed, I can convince myself that I'm an expert on whatever subject I'm singing about, even if I don't know exactly what it is.”


“There are some tips of the hat to rock and roll history in the lyrics that I enjoy singing because they reference the album in a bigger picture. 'Rocket 88' is considered the first rock and roll song that used distortion. That lyrical reference on 'Crucial Velocity' kind of fuels Earth Rocker as a whole with that back story. It's American myth, even though it really happened.”


Not everything on Earth Rocker is strictly vintage rock and roll. Maines made sure his love of the aggression and minimalism of Bad Brains and Fugazi was applied to these tracks. “The simpler the better, and I really tried to keep it streamlined and a little more focused.


Whatever came to mind first was pretty much what I stuck with throughout the whole recording process. I didn't feel the need to try to over complicate the parts.”


The influence of their favorite bands might have inspired Earth Rocker, but continuous growth as players also affected the album. “You wouldn't have a song like 'Earth Rocker' five years ago,” Gaster insists. “We've continued to grow on our instruments, finding our own voices. Hopefully, you hear that on the new songs.”


Behind the scenes, Earth Rocker is also a result of an inordinate amount of preparation for Clutch. The album was entirely plotted out before recording even started at The Machine Shop in Belleville, NJ, with veteran producer Machine. “In the past, we would go into the studio and write,” says Fallon. “That never worked out to anyone's satisfaction. It was really important to do a lot of pre-production, knowing exactly what we would be doing when we went into the studio. It was crucial that we did all that prior to hitting record.”


“It was so mapped out that we weren't even in the studio together. You had to take a lot on faith. But once you know a part inside and out, you can move on to worrying about performance. If you're trying to remember it, then you're not playing from the heart — you're playing from the brain. That always sounds stale on playback.”


The Earth Rocker sessions were largely based on faith for Sult, a guitarist more attuned to riffs than solos. “I would have never expected to be playing as many solos,” he says. “On this album, they definitely had more of a direction than they usually do. It definitely took a lot more concentration, but I walked away from this album liking them more than I have on any other album.”
“I just decided to trust the producer this time and not try to second guess too much. Having Machine there really helped. He's very opinionated on what it should be, as far as performance goes. He definitely pushed us in a direction we normally wouldn't go.”
It was Machine's idea to replicate the flow of their live set with the running order of Earth Rocker. “He kind of made a set list of songs we do live at festivals,” Fallon explains. “He wanted to reproduce that energy in an album. He pointed things out to us, bringing us back to listening to ourselves as a fan would, to make an album that could be played beginning to end at a show, and everyone would dig it.”
“There's a certain energy to our shows that we've had difficulty capturing on tape,” Maines admits. “I think this record comes closer to really capturing that energy of Clutch live. It's a very balanced album. There's no B-side material. It's an album of A-sides. That sounds pretty bold and confident, but that's the way we feel about Earth Rocker.”